skip to main | skip to sidebar

Mama keeps going to see Mama Jane and coming back stinking so bad, the smells in my nose are just HORRIBLE!

She leaves the smell on the sofa and I've had to pee on it THREE times to try and cover over the stink! Mama isn't happy with me but I just don't care, the smell is too much for me to bear! Mama says it is the smell of a new family member what is going in my nose and making me feel cross.

Mummy Jane has got one of these rabbit dogs, Mama says he is just ginormous in sizings, even bigger than Spit the Cat the Bunny.

He came from a rescue and is a german shepard staffie cross and he is one years old, which is the same as me! Why am I not as big as him? He is called Arnie and looks like this - 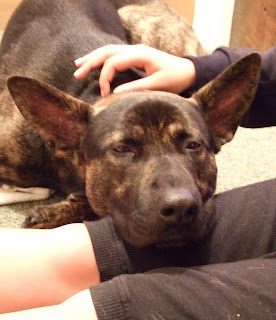 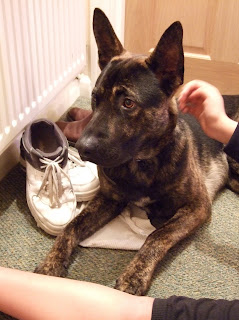 I guess he looks okay but he's not as handsome as me.

Mummy Jane is hoping he settles in good and makes friends with Spit The Cat The Bunny. He is a misery guts so Arnie has a challenge on his hands!
Posted by Carlton Jamal at Monday, December 15, 2008 22 comments:

Sometimes, you just gotta help yourself! 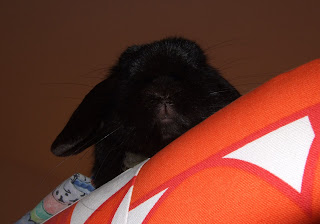 
Sometimes Mama just doesn't give me enough treats so I have to go find them and help myself. Only this time I got caught, uh-oh! Mama said I was very naughty and hid away the treatums! *thump!* My friend Alvin is very worried that his hoomin is going to eat him! His hoomin is trying to handle him but he thinks something terrible is going to happen... I think he needs some kind bunneh words that nothing bad is going to happen! You can see his blog here. He also has AlvinTV so you can watch what him and his wife, Pearl, get up to!

We have more sad news too. :-( Mama's Great Auntie Cynthia died last Friday. Mama said it was The Big C.... but I don't think she meant cawwits. :-(

All this typing makes me need a snoozy time.... night night x 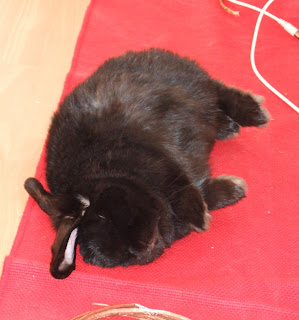 I was doing a worried face because Mama said the fixer man was coming because there was something wrong with the kitchen tap. She hadn't said anything about going to Mummy Jane's so I was worried because I am an ill-eagle immy-grant here, the landlords are racist against the ethnic bunneh and say I shouldn't be here! *thump*

Well, the fixer man did come and I remembered that I have seen him before and that I did like him, he fusses me and says I am handsome and loves my little feets. Well, yes, I am rather wonderful, aren't I? Mama says he is very nice and won't tell the landlords that I live here because he likes me so very much, phew! He can come and do fixings and fussings anytime he likes... though I might tell him to take his shoes off in future because Mama was complaining to me about the wet dirty footprints he left... like I'm supposed to do anything about it?! 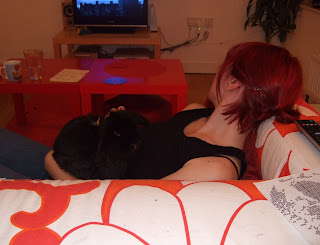 I forgetted to tell you!

A little naughty that I did at Mummy Jane's! It was late afternoon and Mummy Jane had called me for dinner. She said I wouldn't be able to go back out because it was much to dark. This made me a little grumpy so I sat on Otis' laptop cover in the lounge and sulked for a while.

After my dinner settled, I went on a hop about... I thought about trying out the stairs but decided against it. What if I got to the top and couldn't get down again? I would simply starve being so far away from my pellets!!

Anyway, Spit The Cat Bunny is pretty good at opening doors and came in from the kitchen. I hopped into the kitchen before the door shut. I could feel a lovely breeze and noticed the back door was open! I did a naughty sneak out! I must have been dancing around the garden for 30 minutes before Mummy Jane came rushing out in a panic. I was laughing and ran around as she tried to catch me. Silly hoomin. I was quite alright in the dark and the garden is secure so I couldn't get anywhere but Mummy Jane told me about cats and foxes who definitely wouldn't like to be my friends. I told her I would bite them with my little teefs but she said it is not safe to be out in the dark for someone as small as me.

Still, it was fun to sneak out!

Here is me and Daddy having snuggles. <3 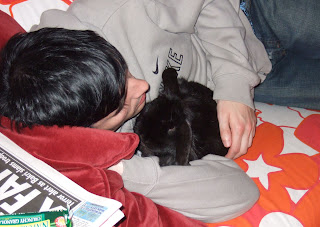 And me telling the hamster to get up for playtime. She didn't though. 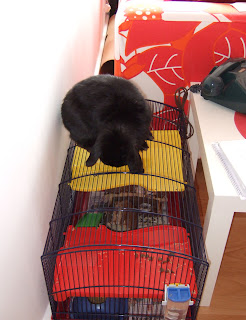 I was a little naughty and did a pee outside of my tray and in my excitement at seeing Mama in the morning, I stomped in it and made squidgy wet footprints on the lounge floor. Mama said I needed a footbath, uh-oh!! It wasn't so bad but I still didn't enjoy myself, does anybunny?! I was feeling bad about messing the floor so I let Mama clip my nails without struggling. She said I was very good and was even given some delicious pear for being good. Mmmmmm!

We had an in-spec-shun last week.... I went to Mummy Jane's which I really enjoy... apart from this time! Spit the Cat the Bunny was really grumpy, Mama said he has grumpy old man some days. I went to say hello and he hit me on the head! On the head with his paw! Can you believe it?!! Mama told him not to hit small people and she waggled her finger at him. I tried to say hello again and he hit me again! He is very strong. I'm glad he didn't have his claws out or I would have been hurt. Mama shouted at him in her big voice - the one she uses when she tell me to get off the sofa - and he started hissing at her! It was like they were having an argument! She told him tog o outside and think about his naughty behaviour, which he did. I was able to snuggle down in the warm spot he left, it was lovely!!

I've been doig alot of sleeping, Mama has been taking an awful lot of photos of me doing sleepytime. 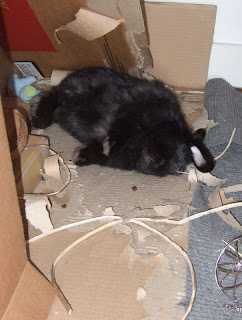 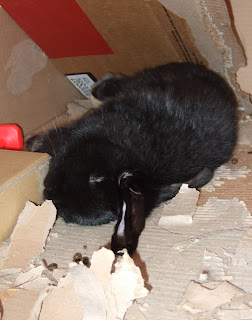 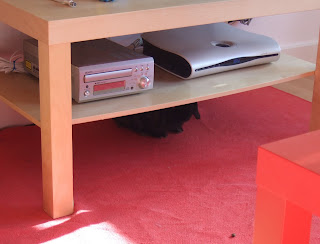 Mama has been doing some sads lately, Great Nana McCormack fell asleep on October 31st, aged 92. I told her that she would be seeing everyone at rainbow bridge and looking after them all. Mama loved Great Nana even though she had lots more wrinkles than Mummy Jane and Granny Maureen put together. She was fiercely independent to the end and still lived alone, Mama says she was an amazing woman and hopes she grows up like her....without the wrinkles, I hope!!
Posted by Carlton Jamal at Tuesday, November 25, 2008 7 comments:

You must have thinked my paws was broken!!

As I havn't posted in sooooo long. It's been lazy days in the life of this ethnic bunny. Lots of lazt snoozings! 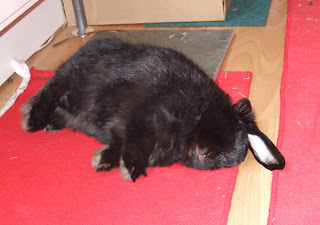 I know I look a bit chubby but I can assure you it's just a bad angle and I really am terribly sleek and athletic.

Tomorrow is a very important day for me, I turn into a very big grown up boy and will be a whole year old. I hope this means I can have coriander whenever I like and also those hoomin mouthmakes that Mama makes so well.

I got a present in the post from a lovely lady called Holidayhutch, I cannot wait to open it! 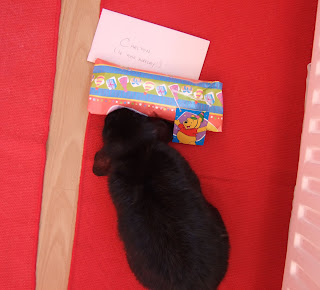 Mama wanted to take some photos before I turned into a real big grown up and I thought I'd share them with you. 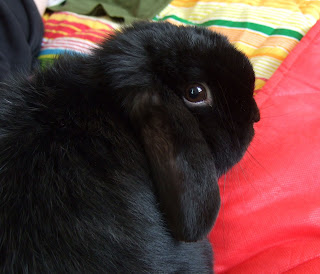 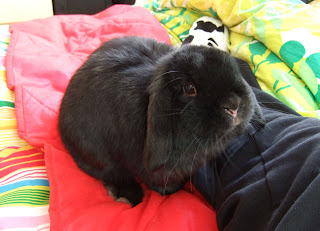 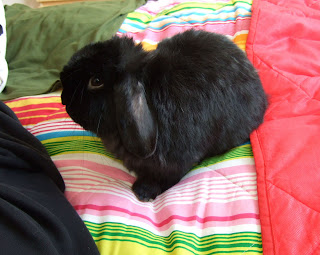 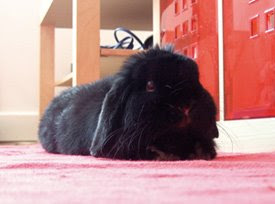 Ooh, I got an award!